IZENASHARK BACK TO THE WINNERS STALL 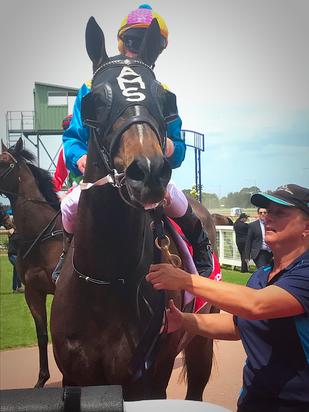 It was a much deserved victory for the consistent Izenashark at Geelong on December 15, the five-year-old having been close up when resuming and honest at each of his spring outings.

Jumping well from a wide gate, Izenashark did not have the easiest of runs on speed, he and the leader kicking up and putting a space on the rest of the field - setting up a good pace.

But they kept going, the pair engaging in a two horse war down the straight with Izenashark gamely getting the upperhand late and drawing clear to win by a length with plenty in hand.

"That's the best way to ride him," said regular rider Brian Higgins, "he doesn't like getting cluttered up, he is at his best just rolling along and quickening off that."

"It has taken me a while to get to know him," Allison said, noting that Izenashark "is a horse who likes to be kept on the fresh side so we don't do a lot of hard galloping with him."

"He is lovely to do anything with and he is a healthy happy horse at the moment."

Looking forward to contesting some night races over the summer, Allison is happy to have won for a group of loyal owners including Izenashark's proud breeder Mordi Wanhope.

A son of Sharkbite - also sire of stable star Andrassy - Izenashark is out of the two times winning State Of Kings mare Lady Zena, also dam of the winners Blazena and Mister Zao.