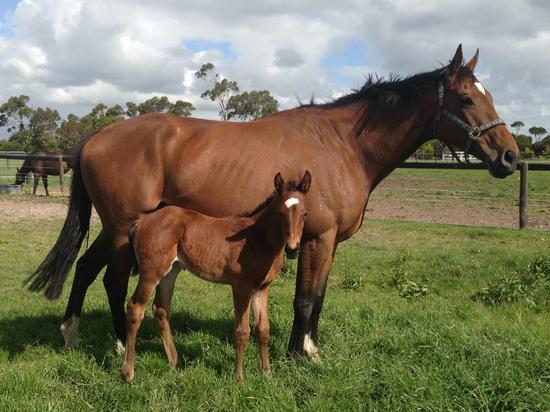 May 1st 2005 was a big day for Allison Sheehan... Jo Bangles breaking her maiden at Bendigo and providing her young trainer with her very first winner!

A game third at her Bendigo debut a couple of weeks previously, El Questro went forward from an outside gate and was always travelling sweetly for Nikita Beriman.

However when favourite Spring Choice put in a strong challenge in the straight it looked as though the bay was going to have to settle for second but - after being clearly headed - she fought - and fought!

Having her nose out right where it mattered, El Questro recorded a determined victory, holding a up a family tradition of breaking maidens at second starts... her dam El Rayo doing the same as did her 3/4 brother Tackleberry who provide Allison with her first metropolitan victory.

Allison first Rob McGuinness when he was training and upon his retirement he sent her a couple of horses including that first winner Jo Bangles - who raced in the same colours as does El Questro!

And so the win was a special one for a number of reasons (she is Allison's first winner whose dam was also a winner for the stable) and she is grateful that El Questro's patient owners have been happy to give her the time she needed - "she is a big awkward sort of horse who has just needed time," she said.

"I have been lucky that her owners have supported me for a long time, it is great that they have been rewarded for their patience with this mare."

Nikita Beriman was not surprisingly a bit short of breath after the race, noting that "I nearly lost my voice I was yelling that loudly at her!"

Describing El Questro as a "big gross mare who is still immature," Berriman said that "she is only going to get better as she gets over further."

"I was rapt with her today, she dug really deep to come back and fight off Spring Choice, all credit to her."

Allison is looking forward to seeing El Questro progress - "we will look to take her through the grades. She comes from a tough, honest family and she will continue to improve and develop with time."

As well as training Tackleberry from this family, Allison also enjoyed success with that five times winner's city winning half-brother Villa Alvarado. This is a consistent family that descends from the four times Group One winner Quill, ancestress of the big race winners One For All, Caucasus, Alpine Rose, Fragrant Mix, Dance Of Life, Run The Gantlet and Hana's Goal.