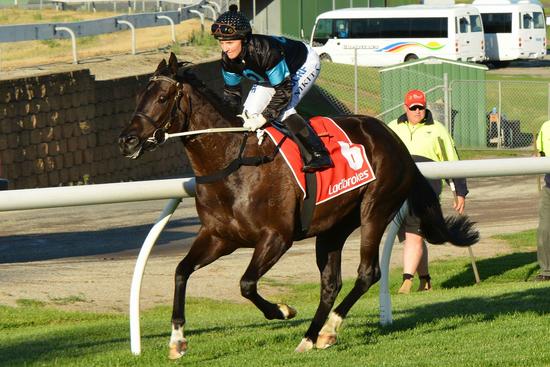 Traffic slowed to a standstill in the Domain Tunnel late last Friday afternoon, fellow road users peered in concern and amusement at the raucous coming from a horse truck caught in traffic. This wasn’t a road rage incident, this was the first leg of a unique training double for in form and very excited Lang Lang horsewoman Allison Sheehan.

Resuming from a spell with Linda Meech in the saddle, She’ll Strykeya made it three wins and seven placings from eighteen trips to the races. The five-year-old mare by Stryker looks set for a prosperous summer campaign.

Alonzah broke her maiden with Nikita Beriman aboard at her fifth start. Alonzah is a four-year-old mare by Zuberi from Pride of Ardossan, making her a half sister to the best horse Sheehan has trained Andrassy (by Sharkbite).

Andrassy, a four-time city winner, has recently been confirmed in foal to Dream Ahead, who stands at Aquis Farm in the Hunter Valley. Pride of Ardrossan also gave birth to a Helmet colt, and has been served by Darley stallion Kuroshio.

Sheehan has her boutique stable (currently seven) firing, with five of her last nine runners successful. The hard working, very much hands on trainer, prepares her team from a thirty-acre establishment in tranquil Lang Lang, with her horses venturing to the state-of-the-art Cranbourne Racing Centre for workouts.

Sheehan has always credited her ability to ride her horses in trackwork as a huge asset to her operation. Being able to gauge accurately the progression of each horse and prepare a work schedule that suits.

Sheehan was delighted to have trained her first double and with the continued outstanding form of her stable, explaining, “It was tough and nerve racking not being at Mornington, that’s only the second time I’ve missed watching one of my runners live (had four hundred and sixty starters). A great result, that did get some very strange looks from truck drivers in the tunnel.”

Allison Sheehan Racing will be represented by El Questro in the BM64 (1200 metres) at Caulfield on Saturday with Luke Nolen to ride. The four-year-old Lago Delight mare has been victorious in two of her five starts, the stable expects improvement on a recent luckless run at Moonee Valley Racing Club (December 1).

Sheehan explaining, “She got caught wide and didn’t handle the Valley, Caulfield should be ideal”