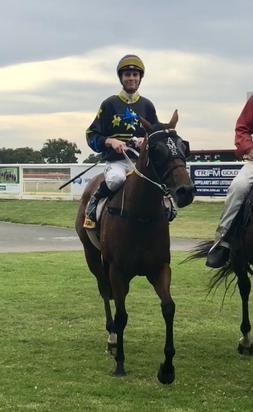 It was a deserved victory for She'll Strykeya at Moe on Sunday, the consistent five-year-old not having had much luck in the lead up but catching the eye with a strong finishing fifth at the same track at her previous outing.

Despite that good performance, She'll Strykeya was rising a couple of kilos, subsequently sent out at good odds.

Always travelling well for Jye McNeil who was having his first ride on the bay, She'll Strykeya sat fourth outside her stablemate Izenashark (who boxed on gamely for a close up fifth) before easing into the clear into the straight.

Shadowed by the much larger Terindah on her outside, She'll Strykeya showed plenty of heart - getting clear at the 100m and holding on as her rivals made a late charge.

Bred by Lee & Carmel Powell out of the five times winning Dolphin Street mare La Piazza, She'll Strykeya has raced well throughout her preparation for the stable and Sheehan has been impressed by her determination - "she is only little but she always tries hard."

"She defied her big odds," she said, "showing her toughness and continuing her consistent form. And I think she did better with a senior rider aboard, he had her a bit closer to the pace."

"She was at her top the whole way," McNeil reported, "and it was a very tough win."

It was the stable's sixth winner for the season and Sheehan is understandably proud of her excellent 23% strike rate - and of the fact that the team's horses have now topped $1 million in prize money earnings.