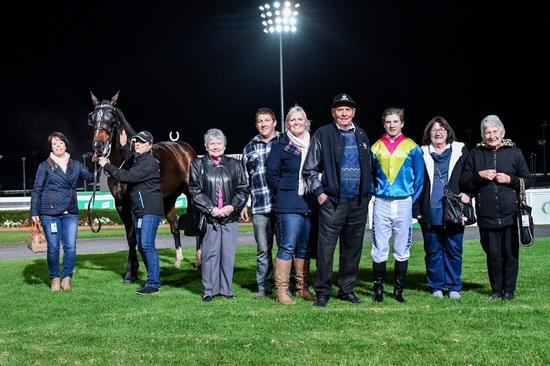 What a terrific galloper Izenashark has been for his proud connections, at Cranbourne on Friday evening proving too strong for his rivals in the final event - in doing so recording the sixth win of his consistent 38 start career.

It is by no means the majority of horses who win that many races and Izenashark has also been a good money-spinner earning over $144,000 in stakes.

"He is a handy horse to have," said a delighted Allison Sheehan who was seen jumping up and down with her very happy owners as the six-year-old crossed the line with half a length to spare.

"He has been super honest," she added, noting that the gelding had been unlucky when unplaced at the same track two weeks previously - "he just ended up in a bad position after knuckling at the start and was in restricted running room the whole time, it was a better run than it looked."

No such bad luck stories this time, Izenashark jumping well and taking a sit behind the leaders. Second into the straight as the leader gave a little kick, he hit the lead at the 100m and was game whilst being challenged by another runner out wider.

"His toughness got him over the line," said jockey Mitchell Aitken who was also aboard when Izenashark won first up at Seymour last spring - "the owners love him", Allison said.

"He is a home-bred for a great bunch," she continued, adding that "we have a few of his relatives including a 3/4 brother coming through."