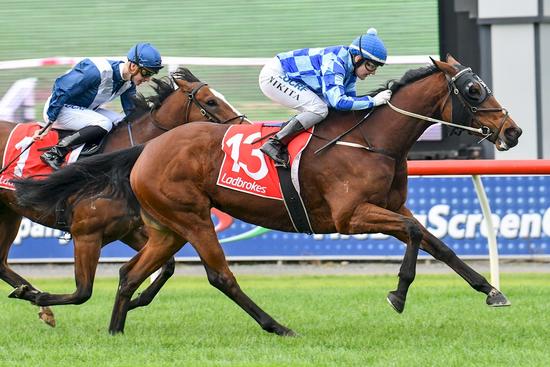 The royal and light blue colours of Rob McGuinness have been carried to victory by some nice horses over the years and it was good to see them back in winning action at Sandown on Wednesday.

Having her first run since last December, the game and consistent mare El Questro was sent out at double figure odds in the 1200m BM70 contest but over the final stages attacked the line in the style of a short priced favourite.

Drifting back in the strongly run affair, El Questro was patiently steered by Nikita Beriman who let the five-year-old find her feet before saving ground turning.

In the thick of things at the 300m, El Questro had a split to take and she was so determined doing just that, really charging from the 200m - hitting the lead with 50m to go and getting clear to win by a length with plenty in hand.

"She deserved a city win," Beriman said, happy to have won her second race on El Questro, adding that "it is pretty sticky out there, they are testing conditions but she handled it beautifully."

"She put them away well - it looks like she is in for a very good campaign."

A consistent mare who ran some great races without things going her way in town last time in, El Questro had Allison Sheehan in happy mode.

"She was so unlucky last time in, she just had little things going wrong."

"It was a big ask for her today on the heavy track first up but she had two nice trials going into it and I was pleased about where she was."

"Nikita knew that there would be plenty of speed on so just rode her race and she was strong to the line."

"It was a great job by Nikita, she knows the mare really well.:

"It is fantastic for every one involved in the horse," Sheehan continued, putting a "special shout out" to Rob McGuinness who trained El Questro's grandam Danto and that winning Danzero mare's two times winner Neranto, a full sister to the Gr.3 galloper Espinosa.

Meanwhile Allison trained dam El Rayo, a Sale maiden winner who did not enjoy a great deal of luck at stud - El Questro being her only foal.

It was a particularly special victory for Allison who gets that extra thrill from cheering on home-breds, this latest success her third city winner from just six foals to race !