Two in a row for EL QUESTRO 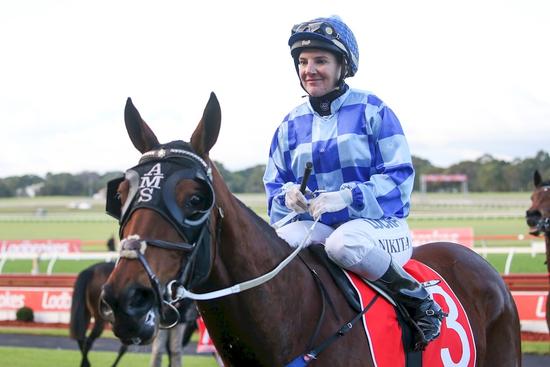 It was rather nice watching El Questro race clear to a soft victory at the Hillside track at Sandown a couple of weeks ago - and it was even more exciting seeing her record a more dominant victory on the Lakeside circuit on Wednesday.

At her first run since last December proving a length too good for her rivals over 1200m, El Questro rose in both weight and distance - stepping up only 100m but copping a decent weight rise of 4 1/2 kg.

But it was not enough to stop the in-form mare who, throughout the running of the BM70 1300m event, travelled sweetly for regular rider Nikita Beriman.

So much so that Beriman was confident a fair way from home - "she was the winner from a long way out," she reported and that was obvious to all watching; El Questro cruising into the straight and quickly gaining the upper hand on the others.

"She was a bit wide but she kept her momentum flowing and she put them away comfortably," Beriman said, adding that the five-year-old - who had run into a bit of bad luck during her previous campaign - has come up improved.

"She has come back stronger and more mature and she has put it all together."

NB: she was the winner from a long way out

"We have her a nice long spell," Allison Sheehan said, "and I have been really pleased with how she has returned."

"I have to thank her patient owners - we have always given her plenty of time, that was only start number 18. She is rewarding everyone now and hopefully there is more to come."

The winner of four racings with a further seven placings to her credit, El Questro - who races in the colours of part owner and former Caulfield trainer Rob McGuinness - has amassed over $112,000 in stakes.

"We are hoping these wins get her a ticket into the Leilani Final," Sheehan said, confident that the bay will be at her peak for that assignment - "she will get to Flemington in great order."