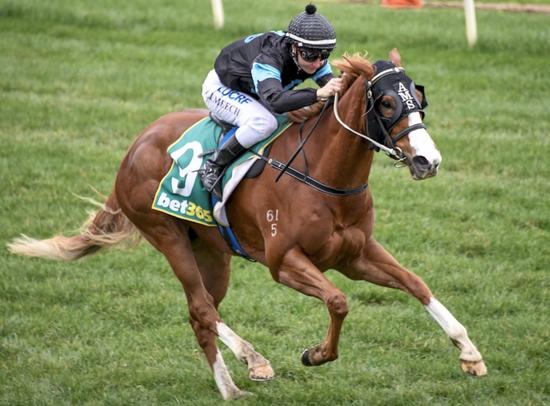 What a well deserved breakthrough it was for Oneira at Geelong on Friday, the tough and consistent mare having had so little luck into the lead up of the 1430m maiden - at her previous outing a hard-held 12th having nowhere to go in the run home!

But fortunately that bad luck story is now just a distant memory with happier times to think of, Oneira's owners justifiably excited by the ease of her maiden victory, the attractive chestnut putting 2 1/2 lengths on her rivals.

Always travelling well off the leader for Linda Meech, Oneira took control of the race a fair way out - in front turning and full of running as she scouted out wide into the better part of the heavy rated track.

As the others tried to chase, Oneira found another gear, accelerating from the 200m... never in any doubt.

"It felt like she was never going to get beaten," Meech said.

"She jumped well, travelled nicely and gave me a good kick... she did it easily."

"It was really nice for the owners that she got the job done today," Sheehan said, confident that there is more to come for the promising four-year-old who she thought highly enough of to try her in Listed company at just her third outing.

"I have always had a good opinion of her and hopefully she can go through the grades now, that win should give her the confidence to go on with it."

Capable on dry and wet tracks, Oneira was in the placings at six of her ten starts before her maiden win, doing a great job for a bargain buy - the daughter of Dream Ahead snapped up for just $17,000 at the 2017 Inglis Scone Yearling Sale.

She was secured at Sheehan's first trip to that sale with the Melbourne sales having been so strong that year.

"I liked Dream Ahead (sire of stable star Andrassy's first foal) and managed to buy Oneira for less than his service fee."

Bred in NSW by Bowness Stud, Oneira is the third winner from three to race for the six times winning Hussonet mare Herewegoagain. Served last spring by Jukebox, she is a daughter of the stakes winning Flying Spur mare Vignor.