GUTSY ONEIRA GETS THE JOB DONE 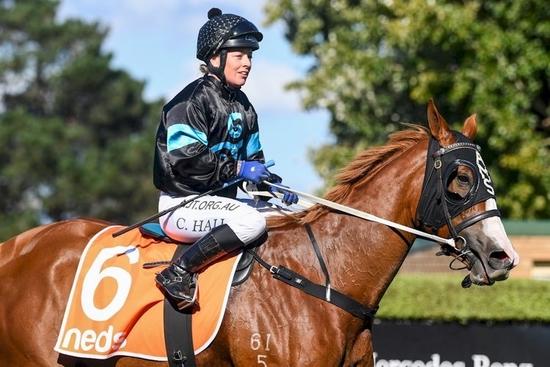 What a gutsy mare is Oneira, the consistent chestnut so quickly into winning form this campaign - at just her second run back from a spell digging deep to claim victory in the 1200m BM58 contest at Mornington on Tuesday.

Patiently steered by Chelsea Hall - who has been such a great help behind the scenes with Allison unable to ride over the past couple of weeks due to an ankle injury (a horse of course!!) - Oneira had the favourite Bellarine Beauty to run down over the final stages.

She relished that challenge, pinning her ears back and finding the line in determined fashion - a deserved success on the back of an eye-catching and unlucky first up third at Bairnsdale.

"Only a wide barrier cost her that day," Allison said, noting that such a draw on most occasions would see her scratch - "but with the pressure on regarding racing's immediate future we decided to take the chance."

The same uncertainty led to Oneira racing nine days after her first up run, Allison keen to get the runs in!

"She pulled up so well and she has run some ripper races at Mornington so it looked a good option for her."

It was a timely win in trying times for the stable with Allison delighted to cheer on a lovely horse raced by great clients.

"The support from our owners in difficult times means the world to me," she said.

She was also happy to see Chelsea enjoy her first win as a senior jockey - "she has done a lot of work behind the scenes and I am so pleased to be able to reward her."

"I was a bit nervous being on the fence," Chelsea said, "but we were able to pop out early and she was strong through the line."

Bred in NSW by Bowness Stud, Oneira was a bargain $17,000 2017 Inglis Scone Yearling Sale buy for Allison who from day one was impressed by the flashy daughter of the multiple Gr.1 winner Dream Ahead.

She is the third winner for the six times winning Hussonet mare Herewegoagain whose dam is the stakes winning Flying Spur mare Vignor.

Sadly Herewegoagain passed away last spring, her final foal being a yet to be named two-year-old colt by Super One.