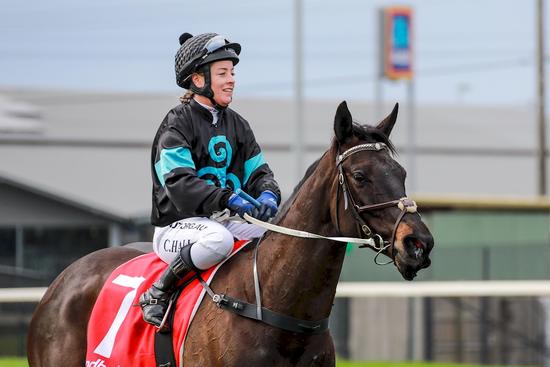 It is always a joy to welcome new owners to the stable and better still when we can join them in cheering home a winner - as was the case with Hello My Friend who was always in command of the BM58 staying contest at Moe on Saturday.

Progressing nicely as she has risen in distance since kicking off for us in April, the tough daughter of the Melbourne Cup winner Americain was well suited by the heavy conditions and whilst her regular rider Jade Darose was busy steering home Jungle Edge at Caulfield, she lost no advantage with the in-form Chelsea Hall taking the ride.

And what a great day it was for Chelsea who won the previous race, later in the day going oh so close to a treble!

“It was Chelsea’s first race ride on the horse but she had done plenty of work behind the scenes this preparation and knows her almost as well as Jade,” Allison said.

“It was a game win from a mare who is as tough as they come,” she continued, “and it was a good ride to just let her roll forward and make the race her own… each time she was challenged she fought harder!”

Something Chelsea also noted… “each time a horse got a little bit close to her she’d get out of her rhythm, so I just her slide and do her own thing.”

“She jumped well, put herself there - we got to the lead easily.”

It was win number five from 26 starts for Hello My Friend who has amassed just short of $130,000 in stakes. Her success is our first for enthusiastic owner Max Walker - and hopefully the first of many!

“I am looking forward to a continued association,” Allison said.

Bred in Victoria by Ken Williams, Hello My Friend is out of the unraced Rock Of Gibraltar mare Priceless Diamond, half-sister to the stakes winning juvenile How Funny from the family of stakes winners Jester’s Girl, Assimilate, Thought Of That and Twining.

Sadly Priceless Diamond is no longer with us but she fared well at stud with all four of her name foals being winners including the stakes placed Magnarock and the city placed multiple winners Rock Spur and Sadia.