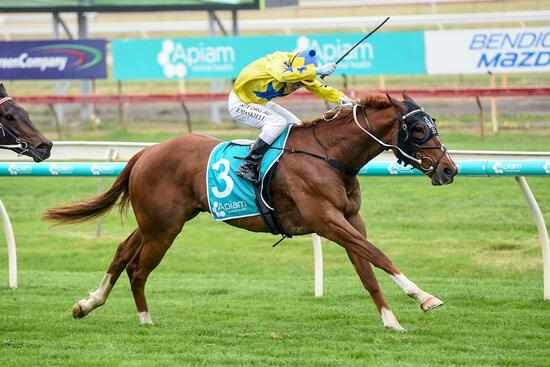 The first couple of preparations for the big, eye-catching chestnut Red Lion were about education and maturity and the patience of his connections paid off when the promising four-year-old was in winning form first up at Bendigo on Wednesday.

Having his first start since mid-May, the son of in-form champion stallion Written Tycoon had jumped out well in preparation for the 1400m maiden and a good draw (barrier 4) saw him enjoy a good run for Jason Maskiell.

Taking a sit after jumping well, Red Lion got into a good rhythm along the rails but did need a bit of luck coming to the turn. Fortunately the field did fan a bit into the straight, enabling our boy (after a couple of attempts at getting a clear run), to gain a split back along the fence.

Once the air opened he was off and away - still a bit green and unsure of himself over the final stages, making his 3/4 length victory all the more impressive.

"He jumped well and put himself there," Maskiell reported.

"He switched off and when I asked for him it was instant. He wanted to float a bit when he hit the lead but it was good to see him put them away - he is a different horse with the blinkers on and I am happy with him going forward”

Everyone connected with Red Lion is thrilled  - including Allison who noted the strong form lines "he had been contesting very good maidens."

Patient with Red Lion who, at 17.2hh weighs in at around 600kg, Allison has always had a good opinion of the gelding... "he has just needed to mature and I am lucky to have such great owners who allow their horses the time they need."

Several of Red Lion's owners (who named their horse in honour of a good day had at the Red Lion Brewery in Kilmore) also enjoyed the career of the Flemington winner El Questro who was retired just week - being readied for a hot date with Brazen Beau!

Catching the eye at the 2018 Inglis Melbourne Premier Yearling Sale where he was secured for $45,000, Red Lion is out of the lightly raced God's Own mare God's Creation. Also dam of the four times winner Spanish Poet, she is a half-sister to the stakes winner Real Time from the family of the Wellington Cup winner Samasaan.