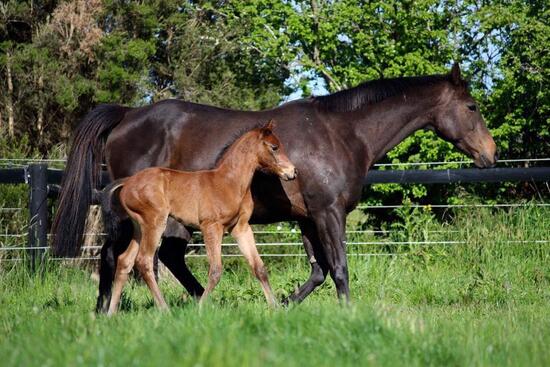 As we recently filled in the retirement paperwork for Pride Of Ardrossan we reflected on the joy she has bought us since coming into Allison's care ten years ago.

"We will be forever thankful to the late John Gilchrist and his family who allowed me to be her caretaker all these years," Allison said.

"Her progeny have given us so much enjoyment and we are proud of her achievements."

The winner of three of her seven starts in Queensland, Pride Of Ardrossan is by Sunline's sire Desert Sun out of the talented mare Royal Sencherec, a seven times winner who was second to Crystal Palace in the Gr.1 Queensland Oaks.

Her dam's only daughter at stud, Pride Of Ardrossan produced a ripper for us straight away - her first born foal by Sharkbite being the stable's multiple city winner Andrassy whose successes at Sandown, Moonee Valley and Caulfield (twice) live strongly in our memories!

Andrassy looks set to follow in the hoof steps of her mum, her first two foals (both fillies) by Dream Ahead and Impending really impressing us.

She was recently served by Widden Stud's Nicconi - exciting times ahead!
Andrassy's full brother Jawsome was not quite as talented but did win his maiden at Pakeham at just his second start... going on to win another six races in provincial New South Wales.

Pride Of Ardrossan's Moonee Valley winning third foal Alonzah has been eventing whilst Alinka has been doing us proud as a show horse. Ancieta has shown ability with five placings from her first nine starts and is currently spelling whilst we recently named the handsome Kuroshio Ardeer... and he looked good winning a Cranbourne jump-out in late September; now enjoying a little let-up before he goes racing.

Pride Of Ardrossan has not had a lot of luck at stud in recent years but with a lot of hard work we got her in foal last spring and after safely delivering a lovely Foxwedge filly in early September she has been retired - due to enjoy her final years being spoilt by Allison!